What is Deionized Water?

What is Deionized Water?

What Is Deionization and How Does It Work? 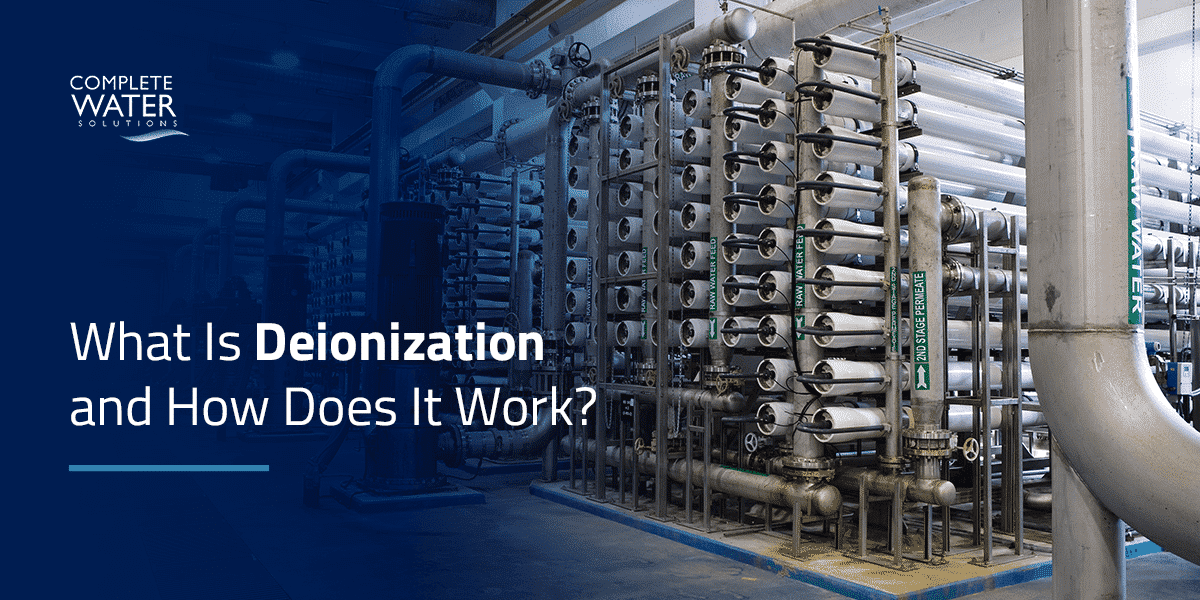 Deionization, also known as demineralization, is a convenient and cost-effective water purification process — whether used independently or alongside other methods. If your existing water purification and filtration systems need higher water purity, a deionization filter may be worth adding.

Numerous industrial water purification systems rely on deionized water to produce the highest purity possible for their processes and products. Any contaminants in the water could alter test results or final products, posing severe risks for patients and consumers.

Deionized water is essential for many industrial applications, including:

Even homes with large fish tanks can benefit from a quality DI system. If your daily operations require pure water, you should invest in a DI system.

All water filtration and purification systems should use deionization, especially those requiring large quantities of pure water daily. DI systems can save you money and time with comparable water purity to distilled water.

Many industries can use 10, 20, 50 or even 100 gallons of purified water each day — deionization is a much faster, more cost-effective and less energy-intensive solution for ultra-pure water. As a bonus, deionized water can significantly decrease your plumbing’s scale buildup.

Any bacteria and viruses present in the water will remain after the deionization process. While distillation can remove TDS and infectious pathogens, deionization can only increase water purity. Partner your DI systems with another water treatment system to target potential bacteria.

How to Make Deionized Water

Deionization’s two-step process can occur sequentially or concurrently depending on the equipment type. Some DI systems feature two separate ion beds, one for each chemical process. Other types use a mixed bed where the two processes coincide. Both deionizer systems are effective, though they operate differently.

Sodium leakage can occur in separated-bed DI systems when the water’s sodium ions fail to exchange themselves with hydrogen in the cation bed. Any sodium ions that leak into the anion bed will combine with hydroxyl to form sodium hydroxide, leaving some impurities in the final water supply. Mixed beds ensure the water does not move forward until it is at the most highly purified state. Since separated beds cost less to maintain, many industries still prefer these DI systems despite the slight decrease in water purity.

Reverse osmosis will remove 90% to 99% of the mineral deposits and other dissolved solids from water. These water filtration systems force water through a membrane — causing purified water to continue flowing through the system — while most minerals, particles and other contaminants get filtered and flushed away.

Many industries use reverse osmosis and deionization systems in tandem instead of treating them as comparable alternatives. While some people filter their water with only one method, a combined use will create the purest water. After the RO system removes most of your water’s mineral deposits, the deionization system can filter out any remaining ions. The resulting water will be purer than either system could achieve alone.

Other Types of Water Deionization

There are four main types of water deionizers.

Each deionizer system can effectively purify your water, though some are better for specific industries or purposes. For example, testing laboratories may require continuous units. These feature a combination of electrodialysis and ion exchange known as electro-deionization to form pure water quickly and consistently. The resin will function continually without replacement and require less maintenance.

Our answers to frequently asked questions will help you understand the ion exchange process and make the best decisions for your water treatment systems.

How Does Deionization Resin Work?

The positively charged resin will attract nondesired cations and release an equivalent amount of hydrogen. The cations removed by this resin include:

A similar chemical process occurs in the negatively charged resin, which absorbs nondesired anions and replaces them with the equivalent hydroxide. The anions exchanged during this process include:

How Long Does Deionization Resin Last?

Your deionization resin’s lifespan will vary significantly depending on the water’s quality and the type of DI system used.

Mineral ions will eventually displace all active hydrogen and hydroxyl in the ion exchange resin. To prolong your resin’s run length, you must limit the amount of total dissolved solids sent to the DI system. High-quality water will have fewer contaminants to remove during deionization and therefore deplete much more slowly. Use other purification and filtration systems before the DI unit to make your deionization resin last longer.

The exhausted resin will eventually need replacing or regeneration. Continuous units, which feature electro-deionization, are an exception and can independently regenerate the same resin for reuse. You can also manually regenerate the resin with caustic acid to remove and flush accumulated ions from the system. Resin beads can last even longer with regeneration.

How Do We Measure Ions?

Since ions conduct electricity, we can measure the water’s ion content by calculating its electrical conductance. Electrical currents use ions to pass through water. Fewer ions will lower the conductivity, meaning deionized water would have a low conductivity value.

Your water deionization system can be a straightforward, one-tank setup or a more complex arrangement of DI tanks and other components. Many industrial deionization systems use supporting equipment such as reverse osmosis and ultraviolet disinfection to produce reliable high-purity water.

The water treatment system you select ultimately depends on the purity level you require, though there are other considerations, too. Supporting equipment often requires higher upfront costs and frequent maintenance. However, this investment may be worthwhile in the long term. DI systems without accompanying demineralization methods will have a 10 to 20 times higher cost per gallon than those that use an RO system.

The water treatment experts at Complete Water Solutions can help you select the best equipment for your process. Whether you’re looking for an all-new system or integration options for existing equipment, we are happy to discuss your current water treatment needs and future possibilities. Contact us about our deionized water solutions and more today.